Ink imprints of fish give novel look into old habitats

Ink imprints of fish give novel look into old habitats 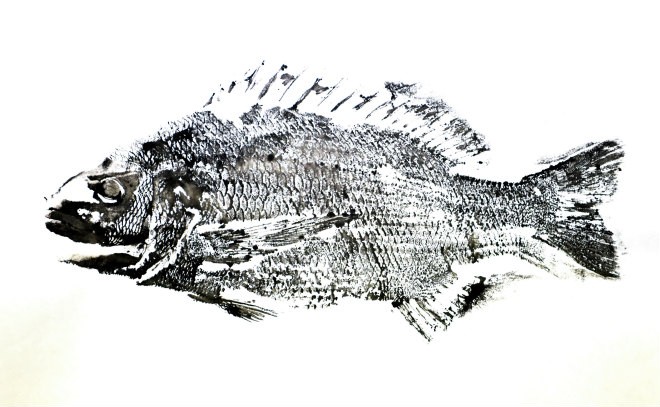 Researchers looking into the history of fish in this country are turning to ink prints typically made when fishermen want to mark a great catch to fill in the gaps.

The study of the prints, made by applying ink to a fish and imprinting it in paper, was conducted by a team led by Yusuke Miyazaki, who lectures at Shiraume Gakuen College and specializes in conservation ecology.

The team contacted tackle shops in Tokyo and various prefectures, including Hokkaido, Miyazaki and Okinawa, and collected information on 261 such prints, representing 325 fish.

By looking at the prints, many of which recorded detailed information, Miyazaki discovered where 235 of the fish were caught and in some cases the type of fish and date.

Some of the prints serve as records of habitats of endangered species, such as the Japanese huchen, blue whiting and Japanese lates.

For instance, the blue whiting is believed to have died out in Tokyo Bay after World War II. One pre-war period fish print found at a shop on a coastline of Tokyo Bay showed a rare record of its existence.

Unfortunately, few such prints date back more than 50 years, as shop owners have since retired or thrown out those that have deteriorated.

“Combined with a specimen at a museum, fish prints will serve as important documents to study the history of fish biodiversity," Miyazaki said. “Their preservation in shops is limited, as they become deteriorated over time, so we should save such documents while we can."

Test and research reactor to be built at Monju site

Test and research reactor to be built at Monju site

The Japanese Ministry of Education, Culture, Sports, Science and Technology…

Cutis, Wingtra and Piavita were selected Switzerland’s most innovative and pr

Switzerland Continues to Be the Most Innovative Country in the World

Switzerland Continues to Be the Most Innovative Country in the World