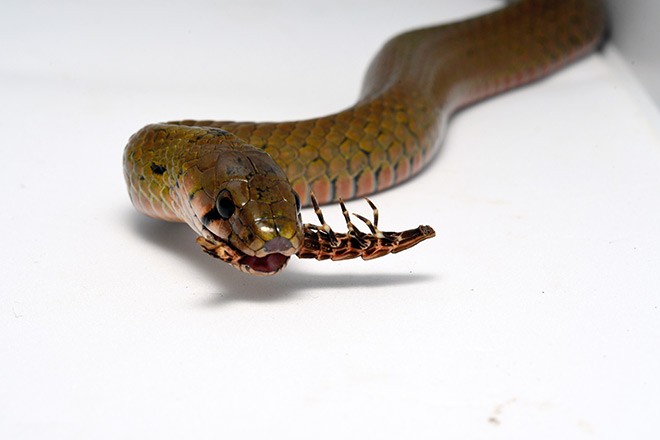 A tiger keelback in China eats a firefly larva. (Provided by Akira Mori of Kyoto University)

Rare tiger keelback snakes in China acquire venom by eating firefly larvae, unlike their Japanese counterparts that gain their toxins by feeding on poisonous toads, scientists have found.

The research team, including scientists from Kyoto University, said the greatly different feeding habits between the Chinese and Japanese species were a surprise.

Their discovery was published on Feb. 25 in the U.S. science journal Proceedings of the National Academy of Sciences of the United States of America.

Although the researchers knew that the snakes in Japan fed on toxic toads, the species in the southwestern part of China was believed to eat mainly earthworms, so they did not know where one of its toxins came from.

Tiger keelbacks are rare poisonous snakes that have two types of toxins. One is generated naturally in their bodies and is released through their fangs to catch prey.

The other venom is secreted through contact with the surface of their bodies, such as the neck, to defend against predators.

The second toxin is a kind of natural chemical substance that cannot be generated inside the snakes’ body.

The scientists, including Akira Mori, an associate professor of ethology at Kyoto University, started studying the source of the defensive toxin by catching about 30 tiger keelbacks in China.

They found that a component in the toxin matched that in the poison in terrestrial fireflies, which eat snails at the larval phase.

The researchers also discovered firefly larvae with the same toxic component in the stomach contents of the Chinese tiger keelbacks. They confirmed that the snakes in captivity did not eat fireflies lacking that component.

According to evolutionary analyses, tiger keelbacks in China are a species newer than the ones in Japan.

“We want to investigate why and how the tiger keelbacks drastically changed their feeding habits from toads to fireflies,” Mori said.

The tiger keelbacks in southwestern China are about 60 centimeters long and smaller than those in Japan.

There are 17 known varieties of tiger keelbacks in the world.

The Japanese ones are gentle and rarely attack people. Their population has decreased following projects to redevelop rice fields and “satoyama” mountains and forests near residential areas.

In some areas, the Japanese snakes are included in regional versions of the Red Data Book on endangered species.

Education
April 8, 2020
The government plans to accelerate the introduction of remote education using…

Material Science
April 8, 2020
When stuff breaks, in a pinch many turn to tape to slap all sorts of things…